The Average of Average is Average 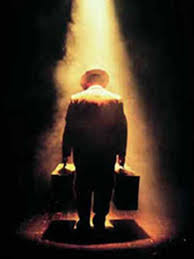 In the play, “Death of a Salesman,” written by Arthur Miller in 1944, the main character Willy Loman, has to deal with age and his career coming to an end and his inability to accept change within himself. The play is a montage of memories, dreams, confrontations, and arguments, all of which make up the last 24 hours of Willy Loman's life. The three major themes within the play are denial, contradiction, and order versus disorder.

According to cliffnotes.com, Each member of the Loman family is living in denial or perpetuating a cycle of denial for others. Willy Loman is incapable of accepting the fact that he is a mediocre salesman. Instead Willy strives for his version of the American dream — success and notoriety — even if he is forced to deny reality in order to achieve it. Instead of acknowledging that he is not a well-known success, Willy retreats into the past and chooses to relive past memories and events in which he is perceived as successful.


Arthur Miller was born in Harlem on October 17, 1915, the son of Polish immigrants, Isidore and Augusta Miller. Miller's father had established a successful clothing store upon coming to America, so the family enjoyed wealth; however, this prosperity ended with the Wall Street Crash of 1929. Financial hardship compelled the Miller family to move to Brooklyn in 1929.

In many ways, Arthur Miller and Willy Loman lived similar lives, each living mediocre lives and each forced to accept that their lives are comprised of denial, contradiction, and disorder... and, what is really interesting here is not just the fact that Arthur Miller and Willy Loman are alike, but most of us Americans are like both of them as well, no matter how vocal we are in trying to deny it.


“Death of a Salesman's,” first major theme is DENIAL... Willy's habit of denying or manipulating reality (is also adopted by his children) and practice it all of their lives, much to their detriment. It is only at the end of the play that Biff (Willy's son) admits he has been a "phony" too, just like Willy. Linda is the only character that recognizes the Loman family lives in denial; however, she goes along with Willy's fantasies in order to preserve his fragile mental state.

My observation: I believe that most of us live like this as well as we try to put positive spins on what life offers us, intuitively knowing and realizing that it has changed from that which is was before; but, denying that realization, we believe and perhaps perceive is a better reality for us to have, given the circumstances.

“Death of a Salesman's,” second major theme is CONTRADICTION... Throughout the play, Willy's behavior is riddled with inconsistencies. In fact, the only thing consistent about Willy is his inconsistency. As the play continues, Willy disassociates himself more and more from the present as his problems become too numerous to deal with.

My observation: Our present lives are riddled with inconsistencies as well and can be seen in how our government operates, our businesses operate, our religious organizations operate, and our schools operate... and, as we age, we find it prudent to disassociate ourselves from our reality as well... as it helps us survive in such a way that we can accept that which we have been given.

“Death of a Salesman's,” third major them is ORDER VERSUS DISORDER... Willy's retreats into the past and each time Willy loses himself in the past, he does so in order to deny the present, especially if the present is too difficult to accept. As the play progresses, Willy spends more and more time in the past as a means of reestablishing order in his life. The more fragmented and disastrous reality becomes, the more necessary it is for Willy to create an alternative reality, even if it requires him to live solely in the past.

My observation: And, as our disorder continues to grow and escalate, we find ourselves looking back in time to a simplier more pleasant time where our society seemed to be more stable and cohesive. We look at our two Presidential candidate and after we realize that neither of them are viable yet one will win, we retreat back in time to when Reagan or Kennedy were President as if we were seeking some of peace-of-mind.

We are Willy Loman and Arthur's Miller's brilliance in writing the play knew that too which is why it was so successful.

While I understand that I am not like you, the reader, in many ways (both good and bad), I believe that my story can be related to by a lot of you. From 1963-1966 I attended Cairo American College (high school) in Cairo, Egypt, U. A. R. and for 4 years I lived a life similar to how “Royalty” must live. We had servants, cooks, yard people and I held a Diplomatic Passport as a result of my father's job at the American Embassy.

The high school I attended was grades K-12, all in the same building, and there were 28 people in my graduating class from 18 differential nationalities. And, what I learned from that kind of association was incredible. We went to school Monday through Thursday, and Saturday with Friday and Sunday off.

We, could do and did just about anything that we wanted. We rode Arabian Stallions out into the desert, we climbed to the top of the Pyramids, we attended adult nightclubs, and went from one party to the party to the next party. In the summer time, we traveled through Europe for 2 months in groups completely unsupervised.

My life has never been like it was when I was living in Cairo and like Willy Loman, I think about what it was like back then for me all the time as I deal with Denial, Contradiction, and Disorder. And, I would suspect if the truth be known, you are no different than me, no matter how hard we try to put a positive spin on the negative.

Email ThisBlogThis!Share to TwitterShare to FacebookShare to Pinterest
Labels: MY Opinion