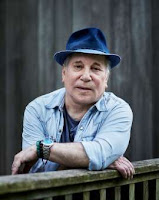 VIENNA, Va. — Paul Simon says he is ready to give up making and playing music, 61 years after he started as a 13-year-old.

“You’re coming towards the end,” he said in an interview this week, discussing the mysterious epiphanies that delivered some of his greatest songs, the toxic qualities of fame, and his yearning to explore questions of spirituality and neuroscience.

“Showbiz doesn’t hold any interest for me,” Mr. Simon said. “None.”

At 74, he often needs 15 hours of sleep at a stretch. The other day, performing in Philadelphia, he looked out from the stage and was surprised to see four mountains on the horizon.

When he put on his glasses, he realized the mountains were actually big white tents. His voice has held up far longer than he had any right to expect but needs frequent days of rest.


While most stars of his generation, unsurprisingly, are playing greatest hits concerts, if anything, Mr. Simon’s new album is competing with those of Drake and Beyoncé on pop music charts, and with Radiohead and Deerhoof for college radio airtime.

So Mr. Simon could leave the public stage with one last hit record and final memories of high-energy performances by his touring band, a collection of masterful musicians rooted in Latin America, Africa and the United States who are taking frisky, joyful turns with the Simon canon and his newest songs.

His North American tour comes to an end on Thursday and Friday in Forest Hills, Queens, where he grew up, went to school and met a boy named Art Garfunkel.

For his audience, at least, finishing the American chapter of his career in Queens, where he began, would be punctuation ripe with history and emotion.

Mr. Simon insists that the place holds no sentimental power over him, but he did note that it was the last venue where he played with Mr. Garfunkel, from whom he is estranged, as he has sporadically been since they became adults.  Read more:
at 8:00 AM

Email ThisBlogThis!Share to TwitterShare to FacebookShare to Pinterest
Labels: Music