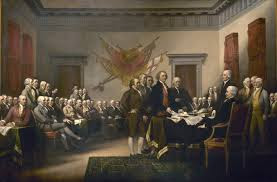 Significance of 4th of July

In just a couple of days, just about everyone in the USA (with a few exceptions) will be, in one way or another, celebrating the 4th of July by drinking alcohol (many will be over-served), cooking hot dogs and hamburgers on the grill (along with apple pie and homemade ice cream), and either watching or participation in the “shooting” of fireworks.

But, do you know why?

Historical Background on this holiday:

During the American Revolution, the legal separation of the Thirteen Colonies from Great Britain occurred on July 2, 1776, when the Second Continental Congress voted to approve a resolution of independence that had been proposed in June by Richard Henry Lee of Virginia declaring the United States independent from Great Britain rule.

After voting for independence, Congress turned its attention to the Declaration of Independence, a statement explaining this decision, which had been prepared by a Committee of Five, with Thomas Jefferson as its principal author. Congress debated and revised the wording of the Declaration, finally approving it on July 4.

A day earlier, John Adams had written to his wife Abigail:


The second day of July, 1776, will be the most memorable epoch in the history of America. I am apt to believe that it will be celebrated by succeeding generations as the great anniversary festival. It ought to be commemorated as the day of deliverance, by solemn acts of devotion to God Almighty. It ought to be solemnized with pomp and parade, with shows, games, sports, guns, bells, bonfires, and illuminations, from one end of this continent to the other, from this time forward forever more.


Adams's prediction was off by two days. From the outset, Americans celebrated independence on July 4, the date shown on the much-publicized Declaration of Independence, rather than on July 2, the date the resolution of independence was approved in a closed session of Congress.

HOWEVER: Historians have long disputed whether Congress actually signed the Declaration of Independence on July 4, even though Thomas Jefferson, John Adams, and Benjamin Franklin all later wrote that they had signed it on that day. Most historians have concluded that the Declaration was signed nearly a month after its adoption, on August 2, 1776, and not on July 4 as is commonly believed.

Every year, citizens of the United States of American, celebrate this 4th of July day as our day of Independence from Great Britain... and, while that may be wonderful for us to see it that way, what we FAIL to realize or understand or even appreciate, is the fact the WE committed treason...

According to the Hoover.archives.gov:
The Colonies Commit Treason
THE TRAITORS
"... we mutually pledge to each other our Lives, our Fortunes and our sacred Honor."
Fifty-six men signed the Declaration of Independence, all fully aware that the punishment for treason was death by hanging or dismemberment. What happened to them?

Five Southern delegates were captured by the British, arrested as traitors and brutally tortured. Twelve had their homes ransacked, looted, burned and other property destroyed. Nine fought and died from either wounds or hardships suffered during the war. One returned home to find his wife had died and his 13 children vanished.

According to umich.edu:
Today, the most famous offenders of the eighteenth-century English treason laws are the American revolutionaries. The Declaration of Independence violates the 3rd law of treason in this statement:

"And for the support of this Declaration, with a firm Reliance on the Protection of divine Providence, we mutually pledge to each other out Lives, our Fortunes, and our sacred Honor".

Are we not all the descendants of TRAITORS?

And, if this statement were seriously considered to be true, then our 4th of July celebrations that take place all over the USA are, in essence, mocking the British, Great Britain, and her most serious law, at least back then.

And, most importantly, our Founding Fathers, admitted to themselves and to others that they were committing an act of TREASON and still signed the Declaration of Independence.

So, today when you are drinking your beers and eating your dogs and burgers, think about how the military of the USA has sent soldiers overseas to STOP some countries from gaining their independence just like we did back in 1776.

Hope you and yours have an honorable 4th of July (Independence Day) celebration and watch the DUI's.