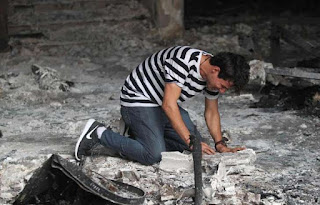 ISIS is facing certain defeat in Iraq and Syria.


However, its demise seems to be unleashing a new phase in the global terror war that may make it far more lethal and powerful.


Its bombing campaign during the Muslim holy month of Ramadan killed more than 800 people.


ISIS is quickly devolving from a physical army into what FBI Director James Comey calls a “terrorist diaspora.” Only a truly global task force can combat the challenges terrorism presents.


It is time for an anti-terrorism variant of the North Atlantic Treaty Organization.


Like NATO, it would be a multilateral alliance specifically focused on collecting anti-terrorism intelligence, detecting and facilitating disruption of terrorist plots, and attacking cyber-based networks.


The attacks over the weekend are the most recent blow from professional suicide cells of the Islamic State.


However, the next iteration of ISIS and Al Qaeda warriors will exist in a hybrid world of very small, covert terror cells and lone-wolf jihadis that are led through a cyberspace-based command network.


This “ghost caliphate” will be even harder to root out. Terrorist leaders are planning to find new shadows between the lines of political and military control to consolidate and form a new global terror nucleus.


Some believe that the world needs to establish a Global Alliance of Terrorism Task Organizations, or GATTO, headquartered in Europe.


GATTO would comprise of law enforcement, intelligence, and legal staff from all member states.


It would be a one-stop clearinghouse for intelligence on terrorists worldwide.


Information would be shared widely, freely, and without restriction to any nation that seeks to help. Read more:

Email ThisBlogThis!Share to TwitterShare to FacebookShare to Pinterest
Labels: Terrorism