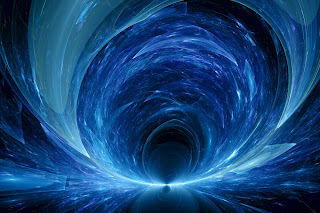 Time travel is the concept of movement (such as by a human) between certain points in time, analogous to movement between different points in space, typically using a hypothetical device known as a time machine, in the form of a vehicle or of a portal connecting distant points in time.

Time travel is a recognized concept in philosophy and fiction, but traveling to an arbitrary point in time has a very limited support in theoretical physics, and usually only in conjunction with quantum mechanics or Einstein–Rosen bridges.

In a more narrow sense, one-way time travel into the future via time dilation is a proven phenomenon in relativistic physics, but traveling any significant "distance" requires motion at speeds close to the speed of light, which is not feasible for human travel with current technology.

The concept was touched upon in various earlier works of fiction, but was popularized by H. G. Wells' 1895 novel The Time Machine, which moved the concept of time travel into the public imagination, and it remains a popular subject in science fiction.

Forward in time
Some ancient myths depict skipping forward in time. In Hindu mythology, the Mahabharata mentions the story of King Raivata Kakudmi, who travels to heaven to meet the creator Brahma and is shocked to learn when he returns to Earth that many ages have passed.


The Buddhist Pāli Canon mentions the relativity of time. The Payasi Sutta tells of one of the Buddha's chief disciples, Kumara Kassapa, who explains to the skeptic Payasi that, "In the Heaven of the Thirty Three Devas, time passes at a different pace, and people live much longer. "In the period of our century; one hundred years, only a single day; twenty four hours would have passed for them."


The Japanese tale of "Urashima Tarō", first described in the Nihongi (720) tells of a young fisherman named Urashima Taro who visits an undersea palace. After three days, he returns home to his village and finds himself 300 years in the future, where he has been forgotten, his house is ruins, and his family has died.


Backwards in time
Like forward time travel, backward time travel has an uncertain origin. Samuel Madden's Memoirs of the Twentieth Century (1733) is a series of letters from British ambassadors in 1997 and 1998 to diplomats in the past, conveying the political and religious conditions of the future.


Because the narrator receives these letters from his guardian angel, Paul Alkon suggests in his book Origins of Futuristic Fiction that "the first time-traveler in English literature is a guardian angel."


Madden does not explain how the angel obtains these documents, but Alkon asserts that Madden "deserves recognition as the first to toy with the rich idea of time-travel in the form of an artifact sent backward from the future to be discovered in the present."


Mr. and Mrs. Fezziwig dance in a vision shown to Scrooge by the Ghost of Christmas Past.


In 1836 Alexander Veltman published Predki Kalimerosa: Aleksandr Filippovich Makedonskii (The Forebears of Kalimeros: Alexander, son of Philip of Macedon), which has been called the first original Russian science fiction novel and the first novel to use time travel.


The narrator rides to ancient Greece on a hippogriff, meets Aristotle, and goes on a voyage with Alexander the Great before returning to the 19th century.


In the science fiction anthology Far Boundaries (1951), editor August Derleth claims that an early short story about time travel is "Missing One's Coach: An Anachronism", written for the Dublin Literary Magazine by an anonymous author in 1838.


While the narrator waits under a tree for a coach to take him out of Newcastle, he is transported back in time over a thousand years.


He encounters the Venerable Bede in a monastery and explains to him the developments of the coming centuries. However, the story never makes it clear whether these events are real or a dream.