CHOP OFF THEIR HEADS 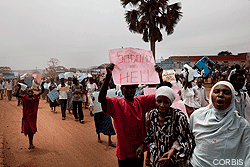 It’s hard to believe, living here in the States, that some African Nations still decapitate men and women who are caught engaging in homosexual acts.  “Kill the Gays” bills are rampant in Uganda and Human Rights Activists there have succeeded in reducing some sentences to life in prison.  They have also begged the U.S. to denounce these governments for marginalizing these groups of people who are widely discriminated against.  Gays here in the U.S. must read over these reports coming out of Africa and feel blessed they live in a civilized society where today steps are being taken to secure their civil rights.  By all accounts, even here, it’s been an uphill struggle.


Even a gay rights activist in Uganda, David Kato, well known throughout the world for his campaign against anti-homosexual bills, was beaten to death with a hammer, his body left with a message that other gays would be the next target.  These stories are difficult to comprehend even from a third world country.  Iron bar killings were popular in the 1970’s when crazy man Idi Amin was in power.  It doesn’t look like much has changed for the gay community since then, more than 40 years later.


As in most countries and Uganda is no exception it is the “Men of God” who perpetuate a hatred for gays and do their best to influence the government.  Most public laws, however, become Mob Justice and men kill gay people by lynching or tar brushing them and in most cases report to officials the execution was because the person was a menace to society.  They simply took the law into their own hands.  In Ghana death is imposed for evil deeds.  Rarely is any killer arrested and tried in a court of law.


In the U.S. people who fight against gay marriage usually congregate around extreme Evangelical religions.  For many of the faithful religion shapes morality.  This morality often finds itself in conflict with political affairs, that of separation of church and state.  Unfortunately for the civil rights movement it has become intertwined for many to view it as a legal issue.  Already 32 states have banned gay marriage and support for these laws is coming from the right with Presidential hopeful Mitt Romney making it clear, in a statement to a religious university recently, that marriage is “between one man and one woman”.  On the left, President Barack Obama has shown his support for gay marriage.  The election in November could very well debate separation of church and Constitutional law.  Equal justice for all.

Murders of gay people here in the U.S. are well documented.  A well-known killing involved Matthew Shepard, a student at the University of Wyoming, who one night in 1998 asked Aaron McKinney and Russell Henderson for a ride home was taken to a remote rural area and tortured, pistol whipped, robbed, and left tied to a fence to die.  This hate crime went to trial with each of the killers getting life with no parole.


Outside the courthouse was Fred Phelps, leader of the Westboro Baptist Church in Topeka, Kansas.  His church’s message was “God Hates Fags” and at the funeral he picketed with signs “No Tears for Queers”.  It is this type of religious extremism that leads the faithful in the U.S.  and the true test to come will be equality under the law.  The Christian Nation will fight hard to convince more people that this is a biblical moral issue and not one that involves separation of church and state.  I wonder how long the issue for equal justice will reach the African nations whose governments appear to be 50 years behind the times.
at 6:00 AM