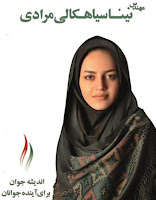 Nina Siakhali Moradi (left) may have succeeded in her campaign for a city council position in Qazvin, Iran, but she may not be able to take her seat.

According to The Times of London, religious conservatives petitioned to disqualify the newly elected member because she is "too attractive."

"We don’t want a catwalk model on the council," a senior official in Qazvin told local press, Al Arabiya reports.

The 27-year-old, who works as an architect and website designer, won at least 10,000 votes in the June election, squarely placing her at 14th among 163 candidates. Since the candidates with the most votes are automatically awarded seats on the council, Moradi would have been named the first alternate, based on media reports about the local election.

However, one of those elected to a council position was later chosen as mayor, thereby opening up a council seat for Moradi.

After news spread that Moradi had been elected, a coalition of conservative religious groups launched a crusade to have her removed. An election review board reportedly upheld the alliance's complaint under Islamic law, and the female councilor was disqualified for failing to follow Islamic norms in her campaign, according to Al Arabiya.

Mohammed Olaiyehfard, a lawyer and law expert in Qazvin, told Iran Wire that thereview board violated election law with its decision to bar Moradi from taking a seat.

"[I]t is illegal for the election review board to disqualify someone who had initially been qualified to run and then later won the election," he told the news agency.

"It seems that this is a pretext in order to create an obstacle in order for this individual to not be able to join the Qazvin City Council.”

For his part, Iranian President Hassan Rouhani has pledged to promote women's rights and advance equality.