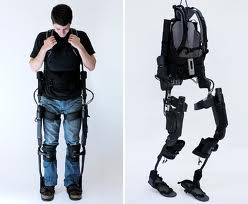 Onboard sensors and artificial intelligence let eLEGS observe gestures in the user’s body to know how and when to move the robotic limbs. Patients use crutches to help them move at speeds up to 2 miles per hour. It is powered by battery and can last up to six hours on a charge.

Berkeley Bionics plans to start clinical trials for the device early next year with limited commercial release in late 2011. Millions of paraplegics around the world could one day rely on eLEGS instead of wheelchairs for mobility. Check out Berkeley Bionics demonstration of the walking system in the video below.

It’s pretty amazing to see the looks of joy on patients as they walk on their own legs for the first time in years.

2010 has been a big year for paraplegic technologies. eLEGS is the third paraplegic walking exoskeleton that we’ve seen in the last six months.

It bears a striking resemblance to Argo Medical’s ReWalk system, which also uses arm crutches to walk at similar speeds. eLEGS and ReWalk both appear much faster, nimbler, but less stable than Rex Bionic’s Rex System out of New Zealand.

The Rex will cost around $150k, but neither ReWalk or eLEGS have been firmly priced yet. All three systems look to be competing for the same market. Hopefully that fight will translate into better products and cheaper prices for paraplegics.

Yet the eLEGS doesn’t fully suspend body weight, relying on the operators legs for some support, which should actually have some positive benefits for physical therapy. In the video, one of the testers points out that such partial support will increase circulation, stimulate muscle growth, etc.

Deeper knee flexion, another of eLEGS’ selling points, should amplify these benefits, as well as open a wider range of terrain that an user can cross.

It's a brave new world