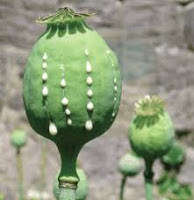 “They’ll keep growing poppies here, unless they are forced not to.  Force is the solution to everything.”  Rehmatou, a 33 year old farmer in Helmand Province, Afghanistan.

Today's Afghanistan, which is 85 % farmers, relies on two dueling revenue streams. One flows from Western aid, in the hopes that the country will renounce the Taliban. The other flows from opium trafficking supported by the Taliban, which use the proceeds to fund attacks on Western troops.

Afghanistan must  end its addiction to opium end; all poppy fields must be destroyed, but this easier said than done. 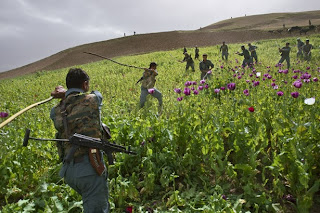 Alexander the Great in the fourth century B.C., is credited with leaving behind the drug that ultimately would. Actual cultivation of poppy shows up in Afghanistan's recorded history about 300 years ago.

It was a crop well suited to the loamy soils of Badakhshan and the eastern province of Nangarhar, where it was first grown—requiring little fertilization and rainfall, a short growing season, and about as much expertise as it takes to hand-scatter seeds and cut slits in a bulb.

Poppy occupied a benign niche in the country's agrarian culture throughout the 18th and 19th centuries, even as India's stranglehold over the opium trade later gave way to Turkey and then to the highlands of Southeast Asia, thanks to the growing market for heroin in Europe and the United States.

According to CBS News, the United States is number 1.
Despite tough anti-drug laws, a new survey shows the U.S. has the highest level of illegal drug use in the world.  The World Health Organization's survey of legal and illegal drug use in 17 countries, including the Netherlands and other countries with less stringent drug laws, shows Americans report the highest level of cocaine and marijuana use. 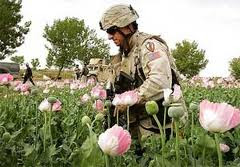 I still cannot help but wonder

we are fighting a war