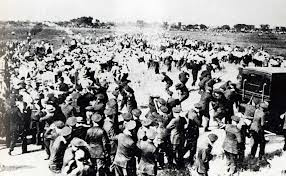 The Elaine Race Riot, also called the Elaine Massacre, occurred September 30, 1919 in the town of Elaine in Phillips County, Arkansas, in the Arkansas Delta, where sharecropping by African American farmers was prevalent on plantations of white landowners.

Approximately 100 African-American farmers, led by Robert L. Hill, the founder of the Progressive Farmers and Household Union of America, met at a church in Hoop Spur in Phillips County, nearby Elaine.

The Elaine Massacre was by far the deadliest racial confrontation in Arkansas history and possibly the bloodiest racial conflict in the history of the United States. While its deepest roots lay in the state’s commitment to white supremacy, the events in Elaine stemmed from tense race relations and growing concerns about labor unions. 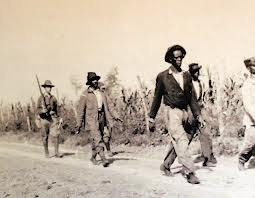 With labor conflicts escalating throughout the country at the end of World War I, government and business interpreted the demands of labor increasingly as the work of foreign ideologies, such as Bolshevism, that threatened the foundation of the American economy.

Thrown into this highly combustible mix was the return to the United States of black soldiers who often exhibited a less submissive attitude within the Jim Crow society around them.

Evidence shows that the mobs of whites slaughtered African Americans in and around Elaine. For example, H. F. Smiddy, one of the white witnesses to the massacre, swore in an eye-witness account in 1921 that “several hundred of them… began to hunt negroes and shotting [sic] them as they came to them.”

Anecdotal evidence also suggests that the troops from Camp Pike engaged in indiscriminate killing of African Americans in the area, which, if true, was a replication of past militia activity to put down perceived black revolts. 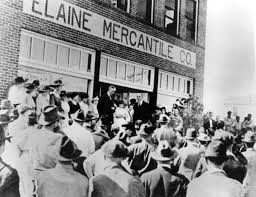 In 1925, Sharpe Dunaway, an employee of the Arkansas Gazette, alleged that soldiers in Elaine had “committed one murder after another with all the calm deliberation in the world, either too heartless to realize the enormity of their crimes, or too drunk on moonshine to give a continental darn.”

The white leaders put forward their view that black residents had been about to revolt. E. M. Allen, a planter and real estate developer who became the spokesman for Phillips County's white power structure, told the Helena World on October 7, “The present trouble with the Negroes in Phillips County is not a race riot.

It is a deliberately planned insurrection of the Negroes against the whites directed by an organization known as the ‘Progressive Farmers and Household Union of America,’ established for the purpose of banding Negroes together for the killing of white people.”

I am ashamed of