It was a film that seemed guaranteed to enrage its homeland: the first feature from a Saudi Arabian woman director, which painted the Kingdom as an oppressive society in which women are second class citizens and girls are forbidden to laugh in public. 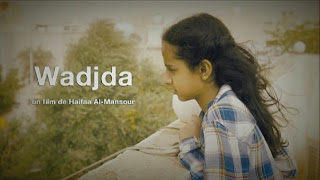 And yet Wadjda, the critically acclaimed drama from Haifaa Al Mansour, has been selected as Saudi Arabia's official nomination for the best foreign film Oscar.

"We are proud of the film as as authentic representation of our country and culture and are pleased to see the themes of the film resonate with audiences well beyond out borders," said Sultan Al Bazie, the head of the Saudi nominating committee. It is the first time the nation has selected a film to compete for the Academy awards.

Set in the homes and madrasas of Riyadh, Wadjda charts the fortunes of a 10-year-old girl who enters a Qur'an reading competition in order to raise money to buy a bicycle. Her teacher is scandalized and her mother is fearful. "You won't be able to have children if you ride a bike," the girl is informed. 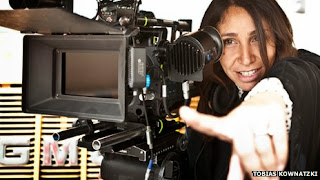 Writer-director Al Mansour (above) has said that she intended the film to be an inspiration to the women of Saudi Arabia. But she admitted that shooting the picture was a "challenging experience". In more conservative neighborhoods she was forced to call the shots from inside a van for fear of sparking protests.

"It's exciting to be a part of Saudi Arabia right now," she told the Guardian in July. "It's a moving society. And for me, just to be a part of it is all right, either in a van or outside the van. The most important thing is to make an authentic film."

Backed by European money, Wadjda opened to rave reviews in the UK in July and is released in selected US cinemas this Friday. The 85th Academy Awards take place on March 2, 2014.
at 7:30 AM