Two momentous decisions involving the Federal Reserve are coming to a head, with significant implications for the U.S. and global economies.

Janet L. Yellen (below), a former University of California, Berkeley economist, stands in the middle of both of them. 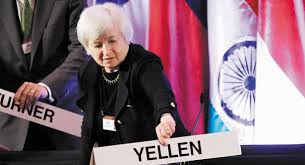 As vice chair of the central bank, Yellen will take a leading role, when policymakers decide whether to start rolling back the Fed's massive monetary stimulus after several years of providing extraordinary support for the weak economy.

The prospect of an imminent policy shift by the Fed has already shaken financial markets from Brazil to India, marking the end of an era of super-low interest rates.

Soon after, President Barack Obama is expected to nominate his selection to succeed Chairman Ben S. Bernanke, whose term expires at the end of January.

Yellen is one of two leading candidates for that increasingly powerful position, and her views on the economy and financial regulations have become the subject of intense interest among economists, investors and policymakers around the world.

"The interest is more outsized than normal because we're still in very unusual times," said Mark Zandi, chief economist at Moody's Analytics, referring to high unemployment as well as the unprecedented intervention by the Fed.

"The next Fed chair is going to have to unwind all of these extraordinary steps taken to fight the (financial) crisis," he said.

In what has been a highly public campaign for Fed chairman, critics have portrayed Yellen as being softer on controlling inflation than her chief rival for the nomination, former Treasury Secretary Lawrence H. Summers.

That has added to an overall perception that Yellen - a soft-spoken, diminutive woman - may be too soft in general to lead the world's most influential central bank, a criticism that some say reflects a gender bias. But those who know Yellen say that the former president of the Federal Reserve Bank of San Francisco is hardly a shrinking violet.

Back in 1995, a few months after Yellen joined the Fed board, they note, she wasn't afraid to take on then-legendary Chairman Alan Greenspan.

Concerned that consumers were being misled about interest rates on bank deposits, Yellen successfully urged her fellow policymakers to amend a Fed regulation despite opposition from Greenspan. The 4-3 vote was one of only two he lost in more than 18 years leading the Fed.

"That took a lot of gumption because Greenspan was a god-like figure," said Alan Blinder, who was a Fed governor at the time and worked with Yellen to pass the amendment. "You were risking the disapproval of the rest of the board if you defied Greenspan."

Blinder is one of more than 300 economists who in an open letter this week urged Obama to name Yellen. A Yellen nomination would be historic: She would be the first woman to lead the 100-year-old Fed.

For now, most expect Summers to get the nomination. Summers was Obama's top economic adviser in 2009-10 and has a closer relationship with the president than Yellen does.

He is known as a brilliant economist with first-hand experience dealing with financial crises on a global scale. The knock against Summers is that he has a reputation as being difficult to work with, and he is likely to face considerable opposition in the Senate, where he would need to win confirmation.

Email ThisBlogThis!Share to TwitterShare to FacebookShare to Pinterest
Labels: Federal Reserve, US Economy