In a new study, they found that three times as many raw materials are used to process and export traded goods than are used in their manufacture. 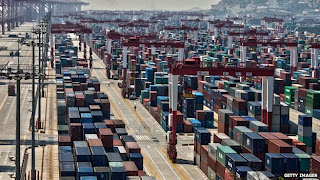 Richer countries who believe they have succeeded
in developing sustainably are mistaken say the authors.

The research has been published in the Proceedings of the National Academy of Sciences.

Many developed nations believe they are on a path to sustainable development, as their economic growth has risen over the past 20 years but the level of raw materials they are consuming has declined.
But this new study indicates that these countries are not including the use of raw materials that never leave their country of origin.

The researchers used a new model that looked at metal ores, biomass, fossil fuels and construction materials to produce what they say is a more comprehensive picture of the "material footprint" of 186 countries over a 20 year period.

In 2008, around 70bn tons of raw materials were extracted worldwide but just 10bn tons were physically traded. Over 40% were used to enable the processing and export of these materials.

"By relying on current indicators, governments are not able to see the true extent of resource consumption," said Dr Tommy Wiedmann from the University of New South Wales.

"The trade figure just looks at the physical amounts of material traded, but it doesn't take into account the materials that are used to produce these goods that are traded - so for something like fertilizer, you need to mine phosphate rocks, you need machinery, so you need extra materials."

In this analysis, the Chinese economy had the largest material footprint, twice as large as the US and four times that of Japan and India. The majority comes from construction minerals, reflecting the rapid industrialization and urbanization in China over the past 20 years.

The US is by far the largest importer of these primary resources when they are included in trade.


Per capita, the picture is different, with the largest exporters of embodied raw materials being Australia and Chile.
at 2:00 PM