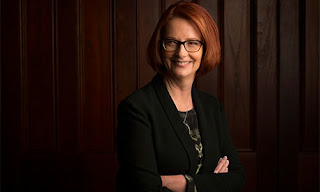 Australia's former prime minister (above) breaks her silence, writing exclusively for Guardian Australia on her legacy, her hopes for a new Labor leader… and the pain of losing power.

During the election campaign, an elderly lady in Melbourne’s west grips my arm with surprising force. Next day I have light bruises to remind me of the moment. She looks at me with anxiety in her eyes and says that while she reads and watches all the news she just can’t understand what the election campaign is about. She wants to know, is this her fault or the fault of the campaign?

After a resounding Labor loss, that word “fault” is now everywhere. Exhaustion and emotion have been on sad display in the last few days. But though it is so painful and so hard, now is a time for cool analysis.

It is a time to carefully plan Labor’s future and its next contribution to the nation.

The purpose of power

Are election victories the only measure of political success? Inevitably this seems a silly, self-serving question to ask after a defeat.

It is impossible to imagine modern Australia without Medicare, our universal healthcare scheme, which was introduced by the Whitlam government, repealed by the Coalition and then introduced by Labor again. This reform has become so significant a part of our national story that the political contest which surrounded its birth is now over.

No serious candidate for public office runs on a platform opposing Medicare. Today's Australia is not home to the kind of conservatives who would be ideological enough or dumb enough to contemplate such a political campaign. If anything, the national mood around Medicare is one of smug complacency.

How much smarter are we than the Americans, still struggling with health reform, we think to ourselves.

Despite the shattering defeat of the Whitlam government, despite Bob Hawke being toppled as prime minister by his Labor colleagues, despite the savage loss of the Keating Government, Medicare is there. Labor shaped the national consensus and bettered our nation.

Even in the midst of today’s despair, Labor must not surrender its sense of self as defined by its dominance over so much of what is our national consensus. Indeed, a truly striking feature of Tony Abbott’s election campaign is how little he was prepared to challenge Labor’s hold over our national consensus.