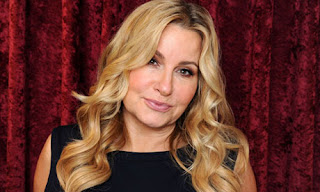 There are some people who need do next to nothing to be funny. Jennifer Coolidge (above) only needs to appear on screen and you're primed to laugh. Oversexed and undereducated seems to have become her forte.

Currently, she is starring as a vamp Polish cleaning lady in the US sitcom 2 Broke Girls where her every pout is a treat. Before that, she memorably played Legally Blonde's Paulette, the scrunchied, sweetly frumpy manicurist whose stale romantic life Reese Witherspoon seeks to remedy.

But most people know 52-year-old Coolidge as the ur-milf: Stifler's Mom in American Pie.

Boozed and sizzling, she sizes up her adolescent prey with the words, "I got some scotch. Aged 18 years, the way I like it."

I put to her the truism that it takes a smart person to play dumb. "Well I think you have to believe you're dumb," she says. "I think if you truly believe deep down that you're dumb it really helps, it really comes out."

"Things come out in a movie and it's not planned," she says of Charming. "You're like, 'Where did that come from?' I don't know if I wanted it to sound that vulgar, but that's what happened."

Today, though, encased in LBD body armour, aggressively tanned and towering in heels, her Barbie-fabulous rigid blonde waves don't so much fall as they do pillar over her face and shoulders.

Coolidge says she grew up watching a lot of TV, especially British shows like Upstairs Downstairs, "wanting to be one of those women so badly and knowing the harsh reality that I probably don't have the sophistication to pull it off."
at 7:30 AM