Researchers seeking weapons against HIV have solved a molecular riddle about how the pathogen docks with immune system cells to unleash its viral mayhem.

Their computer-generated images of the molecules, which are 185,000 times smaller than the width of a human hair, offer researchers promising avenues for developing a drug that might impede HIV's cellular invasion, according to a study published online Thursday in the journal Science Express.

“We don’t have the whole scenario of what happens when HIV enters a cell, but this is going to be a major jigsaw-puzzle piece,” said Dr. P.J. Klasse, a virologist at Weill Cornell Medical College in New York, who was not part of the research team.

“These authors have really accomplished a lot in explaining how the virus chooses between different co-receptors.”

The researchers, based at the Shanghai Institute of Materia Medica and the Scripps Research Institute in La Jolla, Calif., sought to illustrate how proteins on the surface of the virus help it dock with the membrane of a victim's helper T-cells, a kind of white blood cell.

To do so, the immunodeficiency virus takes advantage of cell receptors, which are crucial to thousands of genetic signaling functions in living things from amoebas to animals. These unseen facilitators are largely responsible for how the body pulls off unique and complex tricks such as vision, smell and the firing of neurons.

They also are central to inflammatory responses that can be the root of chronic disease.

HIV was known to take advantage of two such helpers in a class known as chemokine receptors. A member of the Shanghai-based team had helped solve the structure of one, CXCR4, while at Scripps, and researchers had developed a drug to impede the second co-receptor, CCR5, that is more commonly used by strains of HIV1.

Together, the receptors trigger a process that allows the virus' membrane to fuse with the membrane of human T-helper lymphocytes and other vulnerable cells.

The Shanghai team used a crystallized form of the CCR5 receptor, bound to the blocking drug Maraviroc, to determine the receptor's structure. That enabled them to compare it with the structure of the other receptor to discern subtle differences. 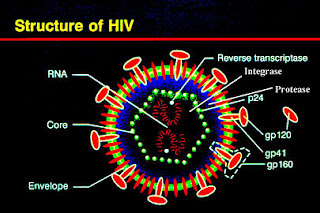 The images published Thursday reveal subtle differences in the “binding pockets” of the receptors. They also offer details about how Maraviroc (marketed as Selzentry) alters the shape of the receptor, indirectly blocking HIV’s invasion.

The breakthrough could offer ways to improve the drug's effect or develop new pathways to defeating the virus.

“If you could unleash the trigger of the virus before it reaches the cell, you would for all practical purposes irreversibly inactivate, or to use more drastic language, kill the virus,” Klasse said.
at 2:00 PM