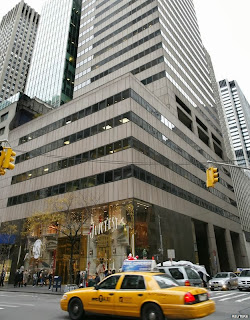 An office tower in Manhattan
that prosecutors claim
is secretly owned by Iran
is to be seized by US authorities.

The seizure would be the "largest-ever terrorism-related forfeiture," the US justice department said.
Prosecutors said the Fifth Avenue building's owners funneled rent income to Iran's state-owned Bank Melli in violation of sanctions.

One owner, the Alavi foundation, said it was "disappointed" with the ruling and planned to appeal.

Manhattan Federal Prosecutor Preet Bharara said Alavi and its co-owner, the Assa Corporation, operated as a "front for Bank Melli, and thus a front for the government of Iran", AFP reported.

Mr Bharara said funds from selling the 36-storey structure would provide "a means of compensating victims of Iranian-sponsored terrorism."

The US has imposed heavy sanctions against Iran that restrict the transfer of funds and services. The controls aim to put pressure on Iran to abandon a nuclear program that Tehran denies is designed to develop weapons.

The justice department said Alavi also ran a charitable organization for Iran and managed the building on behalf of the Iranian government.

Prosecutors say the office block, built in the 1970s, was constructed using a Bank Melli loan by a non-profit organization run by the Shah of Iran.

They claim it was expropriated by the Iranian government following the country's 1979 revolution. The Shah's non-profit organization was later renamed as the Alavi Foundation.

She rejected Alavi's demand for a trial and said its claims that board members were unaware that Assa was controlled by Iran amounted to a "collective amnesia".

The foundation said it was unhappy with the judge's decision and intended to appeal once a final judgment was made.

"The foundation was ready for trial and is disappointed that it did not have the opportunity to rebut the government evidence before a jury," it said in a statement on its website.
at 7:30 AM

Email ThisBlogThis!Share to TwitterShare to FacebookShare to Pinterest
Labels: Terrorism