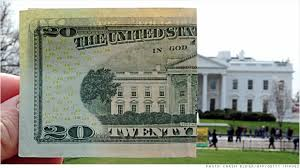 China and Japan are both worried about the current upcoming fight over the U.S. debt limit.

According to the Independent:

The Chinese Vice Foreign Minister, Zhu Guangyao, told America's deadlocked politicians on Monday that "the clock is ticking" and called on them to approve an extension of the national borrowing limit before the federal government is projected to run out of cash on 17 October.

"We ask that the United States earnestly takes steps to resolve in a timely way the political issues around the debt ceiling and prevent a US debt default to ensure the safety of Chinese investments in the United States," Mr Zhu told reporters in Beijing. "This is the United States' responsibility," he added.

If the United States doesn't, what would happen? 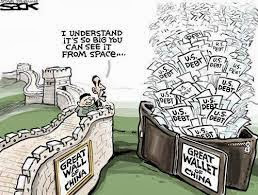 China might have to give up its mercantile strategy of holding the yuan far below its market rate while keeping out American products in order to steal American industry.

China might lose money on some of the loans that it made to the United States government as a byproduct of this mercantile strategy.

Japan is also concerned. It is threatening to slow or stop its purchases of U.S. Securities.

On Tuesday Japan's finance minister Taro Aso called on "the United States to resolve its debt ceiling stand-off without delay."

The absolute value of US bonds held by the Japanese government could decline if the situation was not brought to a swift end, he added.

These Japanese companies will likely invest some of their increased profits in new products, which should enable them to gain market share in their competition with American companies.

They might even have to take down their trade barriers and let their people buy American products with the dollars that their exporters are earning from selling to the United States.
at 7:30 AM

Email ThisBlogThis!Share to TwitterShare to FacebookShare to Pinterest
Labels: China, Japan, US Debt