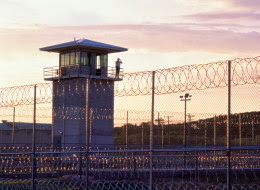 Guards at a Pennsylvania prison are accused of organizing inmate fights and challenges, which they allegedly referred to as "Retard Olympics."

According to state police, three corrections officers at York County Prison are facing charges in connection with the case.

"The corrections officers arranged fights and stunts to take place under the promise that if the inmates competed or won, they would get extra food and extra coffee,"Pennsylvania State Police Trooper Robert Hicks told The Huffington Post.

The "fights and stunts" to which Hicks refers are detailed in statements given to police by inmates David Michael Wright and James Williams Hicks Jr., no relation to Robert Hicks.

In a written statement to police, Wright, 27, said the first incident occurred when Graff, Haynes and Whitcomb arranged for him to wrestle James Hicks, also 27.

The men were allegedly promised lounge food and extra coffee if they won. Wright said he won that first match and as a result James Hicks was no longer permitted to keep his job as a hall worker.

Wright also alleged that he was told to wrestle Graff in a storage closet.

"He cut my air supply off, so I dropped him on the ground and he said enough, enough," Wright wrote in his statement to police.

The inmate also claimed he was offered food in exchange for allowing Whitcomb to punch him in the leg and give him a "dead leg," meaning the inmate's leg would go numb for a short period of time.

Wright said he allowed the officer to punch him in the leg and arm, but never received payment.
Graph also allegedly failed to follow through on a promise to give Wright coffee for allowing the corrections officer to spray pepper foam in his face.

In his own statement to police, James Hicks told authorities the fights and challenges, which he said were consensual, were called the "Retard Olympics." He said he would do "stupid stuff for food and coffee."

That "stupid stuff," James Hicks alleged, included, drinking a gallon of milk in an hour, eating a spoon full of cinnamon, snorting a line of spicy vegetable powder and drinking a bottle of water with pepper spray foam in it.

can those in power

Email ThisBlogThis!Share to TwitterShare to FacebookShare to Pinterest
Labels: incarceration