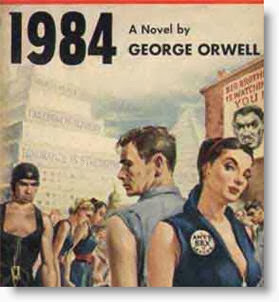 After illustrating their enthusiasm for repealing the Bill of Rights, a video shows Americans happily signing a petition to support a “Nazi-style Orwellian police state,” in what easily represents the most shocking footage of its kind to date.

Citing issues with how the government shutdown has impacted the ability of the police to “keep the community safe,” Dice tells San Diegans that there is a need to “increase the Orwellian system.”
“Not a problem,” responds one man as he signs the petition.

“We just want to model it after the Nazi Germany system to keep people safe and secure,” Dice tells another individual.

After signing the petition to “implement the Orwellian police state,” another man responds, “You find the pot of money though,” apparently more concerned about how much a Nazi-style police state would cost than its actual consequences.

“They’re trying to cut the budget by 20 per cent so we just want to make sure that we can model the police state after the Nazi Germany system,” Dice tells another couple who sign the petition, before adding, “Thanks for supporting the police state.”

“We’re going to model it after the Nazi Germany-style police state,” Dice clearly tells another man who signs the petition.

“We need this Orwellian-style system to keep everybody safe,” Dice tells a woman as she is signing the petition, to which she responds, “Yeah.”

The standard bearer for using satirical petitions to illustrate how misinformed Americans really are stretches all the way back to 1990, when it was repeatedly proven that people would sign petitions to ban water, but only if it was renamed “dihydrogen monoxide.” Penn and Teller reproduced the social experiment in 2003 when they were successful in getting environmentalists to sign a similar petition.

However, Dice has proven that some element of trickery is no longer necessary to convince Americans to support ludicrously draconian policies.

He quite clearly spells it out to them on numerous occasions what they are supporting – an Orwellian police state modeled on Nazi Germany.

Dice’s previous videos illustrate how Americans are willing to support just about anything, so long as it is done in the name of supporting Obama or the government, including granting Obama immunity for all crimes he commits while in office.
at 2:00 PM