The Supreme Court heard oral arguments this week in a case about the constitutionality of a New York town's practice of beginning local legislative meetings with mostly Christian prayers.

During one exchange, Justice Antonin Scalia pressed a lawyer for the town of Greece -- which is arguing that a court of appeals erred in ruling that the prayers violated the establishment clause of the Constitution -- on the equivalent of prayer for nonbelievers. 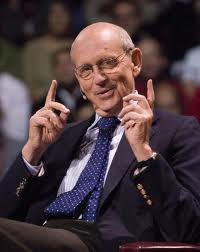 "What is the equivalent of prayer for somebody who is not religious?" asked Scalia, a devout Catholic.
The lawyer, Thomas Hungar, had trouble pinning down an answer, which eventually led Justice Stephen Breyer (above) to interject with a remark that is being seen by atheist and non-theist advocates as a possible admission that he may share their views on religion.

"Perhaps he’s asking me that question and I can answer it later," Breyer said, seemingly suggesting that Scalia had directed the question about nonreligious prayer to him.

While Breyer -- thought of as the most conservative of the liberal-leaning judges --grew up in a Jewish household, his family did not observe the faith strictly. His daughter, Chloe Breyer, is an Episcopal priest.

Nonbelievers have responded with excitement to the possibility that Breyer may not have a religious faith at all. Maggie Ardiente, communications director of the American Humanist Association, said that Breyer's comments could suggest that he's a non-theist, or at least that he would be willing to speak on their behalf during Supreme Court proceedings.

"Elected leaders should not be in the business of leading Americans in prayer, which excludes those who are non-religious," Ardiente said in a statement. "It's a great sign that Justice Breyer seems to be willing to talk to other members of the court to help explain objections non-theists may have to any potential decision.

And, if Justice Breyer is nonreligious himself, it's a great time to 'come out.' He's in good company with nearly 20 percent of the population claiming no religious affiliation."

No avowed atheists or non-theists have been appointed to the Supreme Court. Only one, Justice David Davis III, who served in the 19th century, has claimed to be non-denominational. There are currently six Catholics and three Jews, including Breyer, serving on the bench.
at 7:30 AM