British engineers have taken inspiration from dolphins for a new type of radar that could help detect roadside bombs more easily. 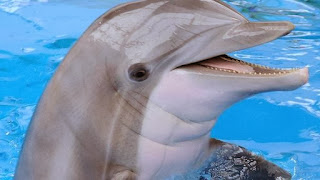 The device sends out two pulses instead of one, mimicking how dolphins pinpoint their prey.
The twin inverted pulse radar (TWIPR) can distinguish between the electronics at the heart of an explosive and other "clutter" such as pipes or nails.

The radar device has been developed by a team led by Prof Tim Leighton, of the University of Southampton, and scientists from University College, London.

Prof Leighton took his inspiration from the way dolphins are able to process their sonar signals to pinpoint prey in bubbly water.

Some dolphins blow bubble nets around schools of fish to force them to cluster together.

Their sonar would not work if they could not distinguish the fish from the bubbles.

He wanted to see if the same technique would work with radio waves, and so developed a system that also sent out pulses in pairs.

The device his team came up with was just 2cm in size and cost less than £1 to put together.

The second pulse has the reverse polarity of the first.

This means that if it hits an electronic device, it turns the pulse into a positive, which in turn gives off a very strong signal.

In tests the team applied the radar pulses to an antenna typical of the circuitry used in explosive devices, which was surrounded by "clutter" metals.

The antenna showed up 100,000 times more powerfully than the other metal "clutter".

Such a device could also be extremely helpful in finding surveillance device as well as bombs, the team said.

It could even help locate people buried after an avalanche or earthquake by detecting their mobile phones.

"Such technology could also be extended to other radiations, such as magnetic resonance imaging (MRI) and light detection and ranging (Lidar)... offering the possibility of early fire detection systems," said Prof Leighton.

He said: "We continue to take inspiration from the many animal super-senses found in nature, whether from the sophisticated echolocation techniques used by bats and cetaceans or the remarkable chemical detection ability of dogs and bees.

"Any technology that increases the probability of detecting IEDs [improvised explosive device] or buried earthquake victims while reducing false alarms will undoubtedly save lives," he added.
at 7:30 AM