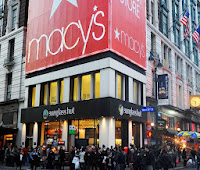 Macy's security guards worked on a quota system of five “arrests” per week — and nonwhite shoppers were identified by an internal “race code system,” according to a lawsuit.

African-American men were referred to as “10-90s” and black women as “10-91s” among store security personnel, a Turkish immigrant charged in court papers after her 2010 arrest. The demeaning code was created by Macy’s “to facilitate its targeting of Middle Eastern, African-American/black and other nonwhite shoppers,” the suit charged.

In a partial deposition provided by her attorney, store detective Brenda Howard acknowledged five “arrests” per week was the target for security workers, according to the suit. Howard could not be reached Tuesday. The attorney did not provide the full deposition.

Racial profiling is the use of an individual’s race or ethnicity by law enforcement personnel as a key factor in deciding whether to engage in enforcement (e.g. make a traffic stop or arrest). The practice is controversial and is illegal in many jurisdictions. It should not be confused with offender profiling, which is an investigative tool.

In 1996 the U.S. Supreme Court ruled in U.S. v. Armstrong that racial profiling is constitutional in the absence of data that "similarly situated" defendants of another race were disparately treated, overturning a 9th Circuit Court ruling that law enforcement must proceed on "the presumption that people of all races commit all types of crimes - not with the premise that any type of crime is the exclusive province of any particular racial or ethnic group", waving away challenges based on the Fourth Amendment of the U.S. Constitution which guarantees the right to be safe from search and seizure without a warrant (which is to be issued "upon probable cause"), and the Fourteenth Amendment which requires that all citizens be treated equally under the law.

To date there have been no known cases in which any U.S. court dismissed a criminal prosecution because the defendant was targeted based on race. This Supreme Court decision doesn't prohibit government agencies from enacting policies prohibiting it in the field by agents and employees.

In his February 27, 2001 address to a Joint Session of Congress, President George W. Bush declared: "Racial profiling is wrong, and we will end it in America. In so doing, we will not hinder the work of our nation's brave police officers. They protect us every day -- often at great risk. But by stopping the abuses of a few, we will add to the public confidence our police officers earn and deserve."

In June 2001 the Bureau of Justice Assistance, a component of the Office of Justice Programs of the United States Department of Justice, awarded a Northeastern research team a grant to create the web-based Racial Profiling Data Collection Resource Center.

It now maintains a website designed to be a central clearinghouse for police agencies, legislators, community leaders, social scientists, legal researchers, and journalists to access information about current data collection efforts, legislation and model policies, police-community initiatives, and methodological tools that can be used to collect and analyze racial profiling data.

The website contains information on the background of data collection, jurisdictions currently collecting data, community groups, legislation that is pending and enacted in states across the country, and has information on planning and implementing data collection procedures, training officers in to implement these systems, and analyzing and reporting the data and results.
at 7:30 AM