Women have always worked in India, but the rise of the corporate woman in the last two decades in the banking sector has been phenomenal.

India has no fewer than eight female banking bosses - indeed the appointment of Arundhati Bhattacharya as the first chairwoman of the country's largest bank, the State Bank of India, came days before the announcement of the new Federal Reserve nominee in the US, Janet Yellen.

It's a stark contrast to places like the UK, where women run the British arm of international banks, but there are no overall female bosses. So how has India done it? 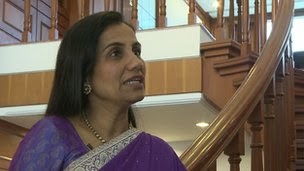 And the reason for it is very simple, according to Chanda Kochhar (above), the chief executive of ICICI, the country's second largest bank - the company promoted on merit, not gender.

"When you have an organisation that is gender neutral, and when you have a woman who is willing to give to her job whatever it takes, whether it's long hours, whether it's commitment to travel, irrespective of the fact that she's a woman, I think women get that opportunity to rise," she says.

There were, of course, sacrifices. "What it required on my part was to really give to the job whatever it took. So yes, there were children at home, but if the job demands travel, hard work, long hours of work, I think you need to give it."

ICICI is seen by many within the industry as a training ground for ambitious women. Typically, a third of its intake will be female, and the bank has made a point of nurturing talent and creating a whole crop of successful women. They include Shikha Sharma, chief executive of Axis Bank.

"But there is the issue of women having the belief that they can make it, and everybody in society becoming sensitive to the fact that women can make it.

"The presence of more women helps both those beliefs to happen, for women to have the belief, and for society to have the sensitivity to understand that yes, women bring a different level of contribution."

Jamnalal Bajaj Institute of Management in south Mumbai trains those who will be the corporate bosses of the future, and counts Chanda Kochhar as a former student. Each year, the institute takes 125 young men and women, and competition to get in is fierce, with around 1,000 applications per place.
at 7:30 AM