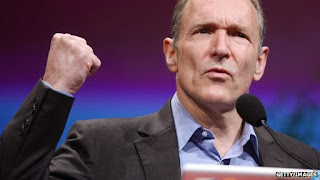 Web creator Sir Tim Berners-Lee (above) has warned that the democratic nature of the net is threatened by a "growing tide of surveillance and censorship".

It suggests that 94% of the countries in the index do not adequately monitor government internet interception.  Thirty per cent of countries block or filter political content, it indicates.

The report concludes that the current legal framework on government snooping needs urgent review.
"One of the most encouraging findings of this year's web index is how the web and social media are increasingly spurring people to organize, take action and try to expose wrongdoing in every region of the world," said Sir Tim.

"But some governments are threatened by this, and a growing tide of surveillance and censorship now threatens the future of democracy.

Bold steps are needed now to protect our fundamental rights to privacy and freedom of opinion and association online," he added.

Sir Tim has been an outspoken critic of government surveillance following the revelations from whistle-blower Edward Snowden.  He described attempts by the spy agencies to crack encryption as "appalling and foolish".

He has previously said that the checks and balances to oversee GCHQ and its US counterpart, the National Security Agency (NSA), have failed.

It is a view shared by digital forensic expert Professor Peter Sommer.  "GCHQ is a spying agency. It needs to produce good results. But how far anyone understands the techniques they are using is more unclear."

"The things they are doing need a ministerial warrant but the ministers have a lot of other things to do. Did they have sufficient understanding of the technology? Who is doing the risk analysis?"