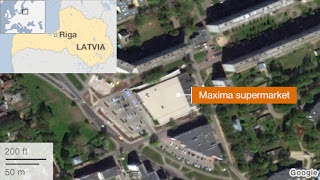 Latvians have begun three days of national mourning for 52 people who died when a supermarket in the capital Riga collapsed on Thursday.

Mourners have gathered at the site of the collapse, along with residents hoping for news of missing relatives.  Rescuers spent a second night scouring the debris but found no more survivors.
Officials say soil from a garden being built on the roof of the shop may have caused the collapse, the deadliest disaster in Latvia's modern history.

In our thoughts we are together with all those stricken by this tragedy," he said.  "No matter what the cause of the tragedy is, the number of victims is too big."

Many people went to the scene to lay flowers and light candles in commemoration of the dead, the BBC's Damien McGuinness in Riga reports.

Rescue teams have been working round the clock at the Maxima supermarket, digging in the wreckage of the single-story concrete and glass building to see if anyone is still trapped inside.

They have been periodically turning off all their equipment and asking the families of missing people to phone their relatives so they can pinpoint the ring tones in the debris.

The initial collapse happened just before 18:00 (16:00 GMT) on Thursday, when the Maxima store was busy with customers.  About 20 minutes later another part of the roof caved in, trapping rescue workers who were trying to reach survivors.

Witnesses said customers tried to run out after the first part of the roof collapsed but the supermarket's electronic doors closed, trapping them inside.  Local media said the building, rented by the Maxima chain, had been awarded a national architecture prize when it was completed in 2011.