A Conduit of Grace

The fundamental particle of the universe that physicists have identified is an atom, in which we find electrons, neutrinos, quarks, or the building blocks, let's say, of all matter. 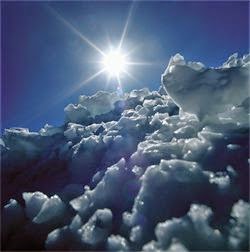 It was long believe that nothing was inside quarks, until recently.

According to string theory, if we could examine these particles with even greater precision (a precision many orders of magnitude beyond our present technological capacity), we would find that each is not point-like but instead consists of a tiny, one-dimensional loop.

It would appear like an infinitely thin rubber band, each particle contains a vibrating, oscillating, dancing filament that physicists have named a string.

But before string theory was conceptualized, physicists relied on quantum mechanics to explain most everything.

Quantum mechanics is the science of the very small: the body of scientific principles that explains the behavior of matter and its interactions with energy on the scale of atoms and subatomic particles.

One part of quantum mechanics was referred to as the uncertainty principle.

The uncertainty principle of quantum mechanics means that the more closely one pins down one measurement (such as the position of a particle), the less precise another measurement pertaining to the same particle (such as its momentum) must become.

In other words, physicists could not state with reasonable certainty where these particles came from nor where they were going nor how fast or slow they might be moving. Apparently, all they could determine was the trail that was left behind them like the wake of a passing boat.

Physicists are hopeful that one day they will be able to prove that string theory will explain and unite all the forces (such as gravity, strong/weak nuclear, and electromagnetic) and all matter. WOW... finally... For more information, click here:

In my research, I have discovered something that, for me, was extraordinarily interesting and it is that which I want to share with you.

As I mentioned previously, only the wake of strings could be detected by physicists and that their
movements could not be predicted with a high degree of probability; HOWEVER, when scientists attempted to determine the path of a string, their path became fixed and somewhat noable.

So, you might be asking yourself, why is this so extraordinary?

Because of 2 concepts that after a while of thinking came into my head.

First, let's turn our attention to thoughts. We all know what thoughts are, right? But, do we think of energy when we think of thoughts?

Ok... so far so good. But, here is where some biblical scholars and fundamentalists are going to discredit my idea...

For me, it was always hard to understand how words created, but substituting thoughts in place of words, now makes a lot of sense to me. And, in my mind, I can see how that is entirely possible and logical.

Second, let's relate scientists trying to observe strings to prayer. This may also seem like a stretch but not really.

When scientists tried to observed strings their path became fixed, so, when we pray to God our path becomes fixed.

In other words, strings are to the universe as human being are to God.

Prayer then acts as a conduit fixing our path to God with the understanding that the more we pray the more fixed our path becomes.

I believe that science and religion have united.