I am not a scientist but I am curious about scientific stuff and believe very strongly that life on other planets is highly probable. Our Solar System, the Milky Way Galaxy is so large and immense that it would take several lifetimes to cross from boarder to boarder even if we knew have to travel at the speed of light. And, there are literally millions, perhaps billions of galaxies in our Universe. Additionally, the Hubble Telescope, designed to measure and record the distance between planets, is sending back data that our known Universe is still expanding. This is not conjecture, this is fact. So, what is it expanding into?

There is so much that we do not know about our world that I thought it best to print the following article in the hopes of opening up your mind(s).

It is my sincere hope that you enjoy reading this as much as I did.

A Universe of 10 Dimensions

When someone mentions “different dimensions,” we tend to think of things like parallel universes – alternate realities that exist parallel to our own, but where things work or happened differently. However, the reality of dimensions and how they play a role in the ordering of our Universe is really quite different from this popular characterization.

To break it down, dimensions are simply the different facets of what we perceive to be reality. We are immediately aware of the three dimensions that surround us on a daily basis – those that define the length, width, and depth of all objects in our universes (the x, y, and z axes, respectively).

Beyond these three visible dimensions, scientists believe that there may many more. In fact, the theoretical framework of Superstring Theory posits that the universe exists in ten different dimensions. These different aspects are what govern the universe, the fundamental forces of nature, and all the elementary particles contained within.

The first dimension, as already noted, is that which gives it length (aka. the x-axis). A good description of a one-dimensional object is a straight line, which exists only in terms of length and has no other discernible qualities. Add to it a second dimension, the y-axis (or height), and you get an object that becomes a 2-dimensional shape (like a square).

The third dimension involves depth (the z-axis), and gives all objects a sense of area and a cross-section. The perfect example of this is a cube, which exists in three dimensions and has a length, width, depth, and hence volume. Beyond these three lie the seven dimensions which are not immediately apparent to us, but which can be still be perceived as having a direct effect on the universe and reality as we know it. 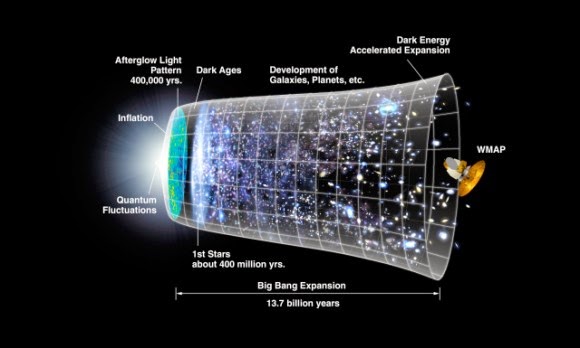 Scientists believe that the fourth dimension is time, which governs the properties of all known matter at any given point. Along with the three other dimensions, knowing an objects position in time is essential to plotting its position in the universe.

The other dimensions are where the deeper possibilities come into play, and explaining their interaction with the others is where things get particularly tricky for physicists.

According to Superstring Theory, the fifth and sixth dimensions are where the notion of possible worlds arises. If we could see on through to the fifth dimension, we would see a world slightly different from our own that would give us a means of measuring the similarity and differences between our world and other possible ones.

In the sixth, we would see a plane of possible worlds, where we could compare and position all the possible universes that start with the same initial conditions as this one (i.e. the Big Bang). In theory, if you could master the fifth and sixth dimension, you could travel back in time or go to different futures.

The eighth dimension again gives us a plane of such possible universe histories, each of which begins with different initial conditions and branches out infinitely (hence why they are called infinities).

In the ninth dimension, we can compare all the possible universe histories, starting with all the different possible laws of physics and initial conditions.

In the tenth and final dimension, we arrive at the point in which everything possible and imaginable is covered. Beyond this, nothing can be imagined by us lowly mortals, which makes it the natural limitation of what we can conceive in terms of dimensions. 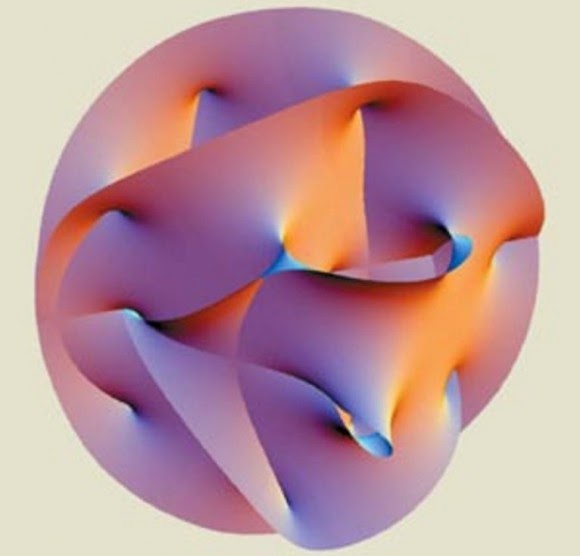 The existence of these additional six dimensions which we cannot perceive is necessary for String Theory in order for their to be consistency in nature.

The fact that we can perceive only four dimensions of space can be explained by one of two mechanisms: either the extra dimensions are compactified on a very small scale, or else our world may live on a 3-dimensional submanifold corresponding to a brane, on which all known particles besides gravity would be restricted (aka. brane theory).

If the extra dimensions are compactified, then the extra six dimensions must be in the form of a Calabi–Yau manifold (shown above). While imperceptible as far as our senses are concerned, they would have governed the formation of the universe from the very beginning.

Hence why scientists believe that peering back through time, using telescopes to spot light from the early universe (i.e. billions of years ago), they might be able to see how the existence of these additional dimensions could have influenced the evolution of the cosmos.

Much like other candidates for a grand unifying theory – aka the Theory of Everything (TOE) – the belief that the universe is made up of ten dimensions (or more, depending on which model of string theory you use) is an attempt to reconcile the standard model of particle physics with the existence of gravity. In short, it is an attempt to explain how all known forces within our universe interact, and how other possible universes themselves might work.

There are also some other great resources online. There is a great video that explains the ten dimensions in detail. You can also look at the PBS web site for the TV show Elegant universe. It has a great page on the ten dimensions.

You can also listen to Astronomy Cast. You might find episode 137 The Large Scale Structure of the Universe pretty interesting.     Source: PBS