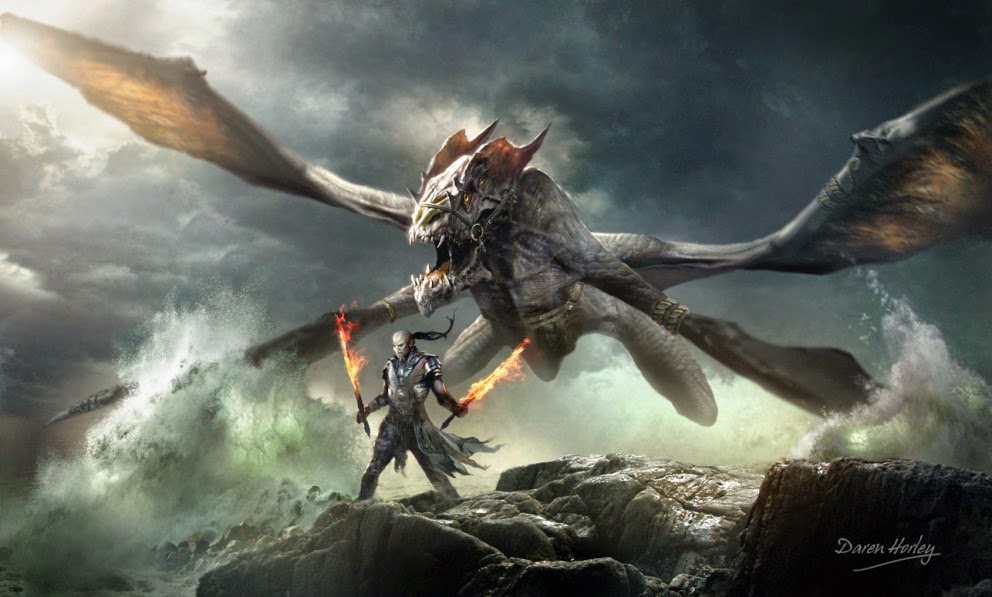 Fantasy is a genre of fiction that commonly uses magic and other supernatural phenomena as a primary plot element, theme, or setting. Many works within the genre take place in imaginary worlds where magic and magical creatures are common.


Fantasy is generally distinguished from the genres of science fiction and horror by the expectation that it steers clear of scientific and macabre themes, respectively, though there is a great deal of overlap between the three, all of which are sub genres of speculative fiction.


In popular culture, the fantasy genre is predominantly of the medievalist form. In its broadest sense, however, fantasy comprises works by many writers, artists, filmmakers, and musicians, from ancient myths and legends to many recent works embraced by a wide audience today.


Fantasy is studied in a number of disciplines (English, cultural studies, comparative literature, history, medieval studies). Work in this area ranges widely, from the structuralist theory of Tzvetan Todorov, which emphasizes the fantastic as a liminal space, to work on the connections (political, historical, literary) between medievalism and popular culture.

The identifying traits of fantasy are the inclusion of fantastic elements in a self-coherent (internally consistent) setting, where inspiration from mythology and folklore remains a consistent theme.

Within such a structure, any location of the fantastical element is possible: it may be hidden in, or leak into the apparently real world setting, it may draw the characters into a world with such elements, or it may occur entirely in a fantasy world setting, where such elements are part of the world.

Essentially, fantasy follows rules of its own making, allowing magic and other fantastic devices to be used and still be internally cohesive.


Fantasy in a psychological sense is broadly used to cover two different senses: conscious and unconscious. An unconscious fantasy could be seen as a daydream or even a night dream; whereas, the conscious fantasy might involve the creator of the fantasy imagining that they are a famous athlete or musician or actor.

Sexual fantasies are a natural byproduct of the human imagination. Yet, they make the majority of us uncomfortable enough that our fantasies about sex and sexual activities remain inside our heads. We are happy to watch the sexual fantasies conjured up by screen writers and read the sexual fantasies designed by authors; but, when it comes to sharing our sexual fantasies, that is, speaking up about and verbalizing what we want from our bedroom encounters with our sexual partners, most of us don't, won't, can't talk about it.


Many marriages subsequently fall apart because these repressed fantasies are ultimately played out with an alternate willing partner. In some case. These alternative experiences are played out because one of these partners changed their sexual attitudes after the marriage either right away or over time.


Let me draw on my experiences from my first marriage:

Before the marriage, my soon to be spouse was a “sex kitten” for lack of a better word and you can define that term anyway you want; but, after the marriage, she was no longer than way, including the types of revealing clothes that she used to wear.

After our first child was born, she changed again, saying that now she is a mother, she can no longer do the things she used to do before being a mother. In essence what that meant, was no more sex because she had a new job as a mother.

Once these changes took place, she no longer trusted me and actually expected me to have affairs and in one instance she said that was fine with her, just keep it discreet and don't consider divorce. Isn't this what every man wants to hear? Perhaps, but not me.


Fantasies are not frivolous. They can be entertaining, distracting, frightening, even arousing, but they also allow for creativity and help us plan for the future. As long as we don't mistake fantasies for reality or let them become too rigid, they provide a necessary escape from the here and now.


Fantasy is an essential part of our thinking. It is imagination in its extremes and shows how far our minds can stretch beyond the normal and the natural. All creativity has an element of fantasy as when an artist paints a nude figure or a poet dreams of a perfect world, even reality itself seems to take on some sort of a fantastic or slightly exaggerated form.


But, when does fantasy become inappropriate or when does sexual fantasies, for instance, become a simple rationalization of pornography?


And yet, sexual intercourse is necessary for the propagation of our species, but is there a reason that it should be used for any other reason between consenting adults? Or, should it be ignored if making babies is not the primary reason for the exercise... and, if we decide to go beyond just making babies, how then, should FANTASIES be interwoven into these experiences... or, should they be ignored altogether?


If we allow ourselves to accept some forms of fantasy, like: Santa Clause, The Tooth Fairy, The Easter Bunny, etc. should we not allow ourselves and our children to experience it all?


Everything that goes on around us feeds our fantasies from our current television shows and movies, to the magazines and romance novels we read, to the clothes both males and females wear, and to the commercials where sexual fantasies are used to sell products. We have commercials on television for Viagra and taking advantage of the time being right and for female lubricants to use after menopause because sex should not hurt. The illusion of sexual fantasy surrounds both those commercials so it is difficult to ignore all that reinforcement.


I remember when I was in my adolescence, my mother used to get mad with me because I was reading Scifi comic books instead of preparing for school at night. The time frame here is the decade of the 1950's and even back then comic books incorporated busty women illustrations and what do you think the purpose of this might be?


To create or plant the seeds of sexual fantasies within the minds of these young children... at least, that is what I think; so, when these sexual fantasies come to fruition later in life, we should then try to suppress them because they could take us down a path we will one day regret taking?


It was not us that started this cycle, it was our adult leaders and parents who allowed it to happen all around us... but then, this is one of our freedoms here in American, isn't it?


I believe this is referred to as UNINTENDED CONSEQUENCES...