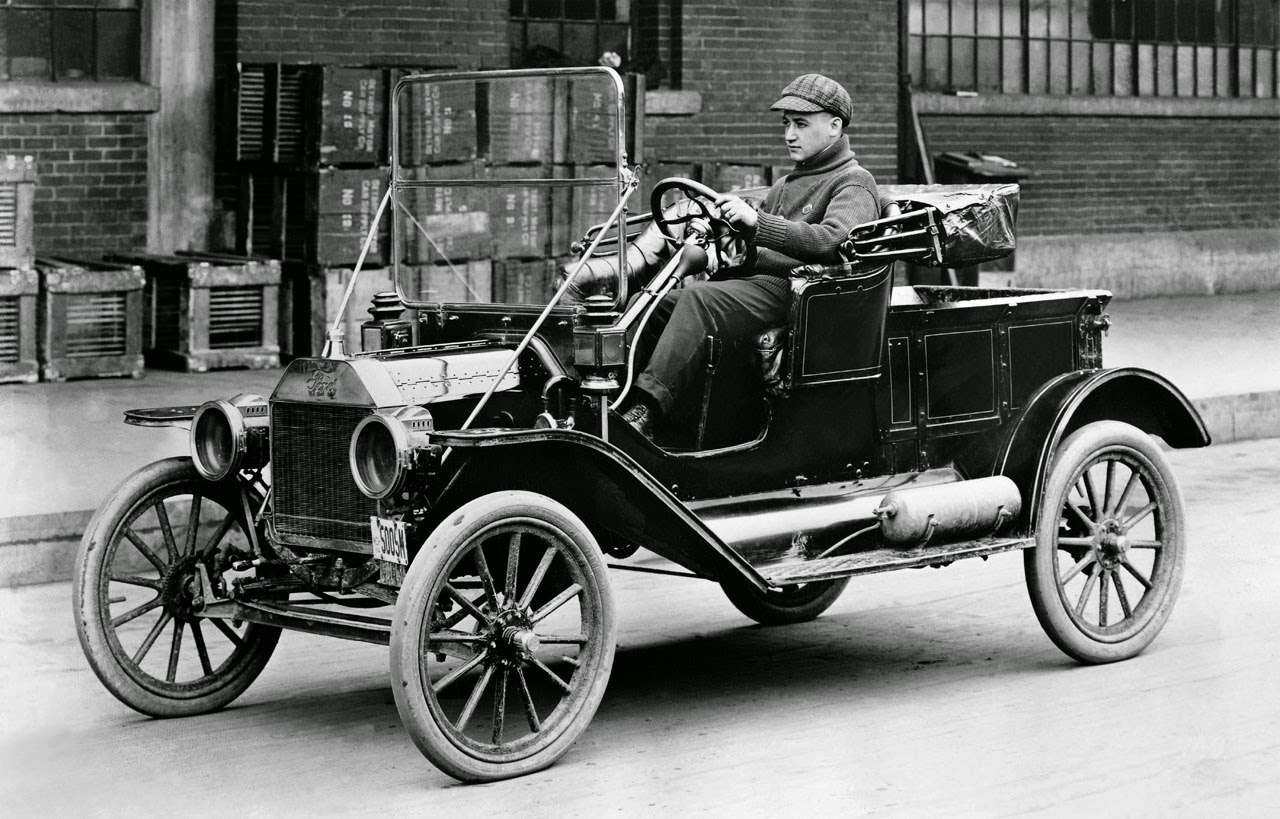 The Ford Motor Company (commonly referred to as simply Ford) is an American multinational automaker headquartered in Dearborn, Michigan, a suburb of Detroit. It was founded by Henry Ford and incorporated on June 16, 1903.

The company sells automobiles and commercial vehicles under the Ford brand and most luxury cars under the Lincoln brand. Ford also owns Brazilian SUV manufacturer, Troller, and Australian performance car manufacturer FPV. In the past it has also produced tractors and automotive components.

Ford owns a 2.1% stake in Mazda of Japan, an 8% stake in Aston Martin of the United Kingdom, and a 49% stake in Jiangling of China. It also has a number of joint-ventures, two in China (Changan Ford Mazda and Ford Lio Ho), one in Thailand (AutoAlliance Thailand), one in Turkey (Ford Otosan), and one in Russia (Ford Sollers).

It is listed on the New York Stock Exchange and is controlled by the Ford family, although they have minority ownership. It is described by Forbes as "the most important industrial company in the history of the United States."

Ford's former UK subsidiaries Jaguar and Land Rover, acquired in 1989 and 2000 respectively, were sold to Tata Motors in March 2008. Ford owned the Swedish automaker Volvo from 1999 to 2010.[5] In 2011, Ford discontinued the Mercury brand, under which it had marketed entry-level luxury cars in the United States, Canada, Mexico, and the Middle East since 1938.

Ford is the second-largest U.S.-based automaker (preceded by General Motors) and the fifth-largest in the world based on 2010 vehicle sales.[6] At the end of 2010, Ford was the fifth largest automaker in Europe.

The company went public in 1956 but the Ford family, through special Class B shares, still retain 40 percent voting rights.


The above information can be found on any website once “the history of the ford motor company” has been typed into a search engine... I used Google.

But, this in not the Ford Legacy... in my opinion.

“Any customer can have a car painted any color that he wants so long as it is black.”

You have got to be kidding, you are either thinking or saying to yourself.
No, I am deadly serious or as serious as a heart as a heart attack, which I have had so I know what I am talking about... LOL

Business Consultants, Business Professors, and those who simply like to hear themselves talking (because those who talk seldom think) will tell you that there is a abundance of ways that businesses can, will, and do fail all the time.

Then, they will set themselves about the task of explaining each of these in intricate details for the most part to prove that their list was correct because they had so much to say about each one.

Even so, there is still no way to capture all the subtle variations of each one of these opportunities at business failures. Yes, that is true... opportunities because we have no problems here.... not today.

Several years ago, the hamburger company Hardees (which btw has the best $6 burger in town) almost went “belly up,” and had to file for Chapter 7, 11, 12, or 13 I cannot actually remember but they were in serious trouble financially and it is because they did not follow Ford's Legacy.

Stated above and simply put: You can have any color as long as it is black.

Hardees like so many other fast foods, restaurants, and businesses try to be all things to all people; and, while that is good from a customer standpoint, it is not good for business as Hardees was to eventually discover on their own.

Once they discovered that this was their problem, they simply eliminated all the specialty food items from their menus and went back to producing what they best and that was making HAMBURGERS.

You can have any type of food you want here as long as it is a hamburger.... said and expressed in true Henry Ford fashion.

I am sure that there are plenty of “wet behind the ears” just graduated Marketing Majors that would disagree with me, but I would say it is their problem not mine.

What I am saying has nothing to do with Horizontal or Vertical Integration strategies or Acquisition and/or Mergers to acquire additional resources and expand markets and marketshares. Those are all valid approaches. Even Franchising has it advantages as long as you are the one selling the Franchise and not buying.

Starbucks has also experienced some of what I am saying with all the specialty coffees that are made available at all their stores all over the country and the world and to some degree it has worked for them, but I “betcha” they can tell you right away what their “best sellers” are.

I don't know if they are still doing this or not but Wendy chain used to put their unsold sold hamburger in the chili to keep from throwing away unsold food which was required by the FDA. I have always thought that this was a clever use of inventory.

And, as all businessmen and women know, one can undervalue or overvalue one's business simply by changing from the LIFO method to the FIFO method (or vice versa) of valuing inventory for IRS purposes.

Marketing departments are typically broken down into 2 specific areas: Sales & Advertising and these 2 areas are supposed to work in an interlocking way but oftentimes they are mutually exclusive and could care less what the other areas is actually doing.

Sometimes, advertising promotes what sales cannot deliver and sometimes sales sells what advertising did not tell the public was available.

Bad communications, I believe, is what this is called which is usually the responsibility of the Head of Marketing; who no doubt has delegated that responsibility to their Directors/Managers of Sales/Advertising while they focus on forecasting trends for the CEO and Board of Directors.

Newly graduated students cannot appreciate these types of business world subtleties because they were never taught them by their “no real world experience” professors.

Maybe I'm just being too hard on these lads and lassies but in true Ford Legacy fashion they can have any opinion they want from me as long as it is this one.

Email ThisBlogThis!Share to TwitterShare to FacebookShare to Pinterest
Labels: An Opinion, Automotive