Black Friday is the day following Thanksgiving Day in the United States (the fourth Thursday of November).

Since the early 2000s, it has been regarded as the beginning of the Christmas shopping season in the US, and most major retailers open very early (and more recently during overnight hours) and offer promotional sales. 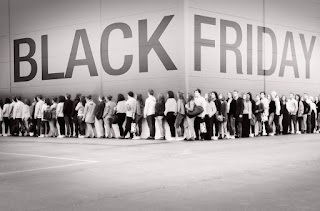 Black Friday is not an official holiday, but California and some other states observe "The Day After Thanksgiving" as a holiday for state government employees, sometimes in lieu of another federal holiday such as Columbus Day.

Many non-retail employees and schools have both Thanksgiving and the following Friday off, which, along with the following regular weekend, makes it a four-day weekend, thereby increasing the number of potential shoppers.

Similar stories resurface year upon year at this time, portraying hysteria and shortage of stock, creating a state of positive feedback.

The day's name originated in Philadelphia, where it originally was used to describe the heavy and disruptive pedestrian and vehicle traffic that would occur on the day after Thanksgiving.

Use of the term started before 1961 and began to see broader use outside Philadelphia around 1975.

Later an alternative explanation was made: that retailers traditionally operated at a financial loss ("in the red") from January through November, and "Black Friday" indicates the point at which retailers begin to turn a profit, or "in the black".

Contrary to what many believed, Black Friday did not originate from the sales of slaves on the day after Thanksgiving.

In 2012, Walmart and several other retailers announced that they would open most of their stores at 8:00 p.m. on Thanksgiving Day, prompting calls for a walkout among some workers.