Why Even Have a Will? 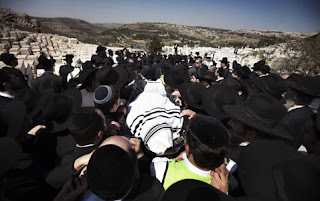 The family of an Israeli transgender woman is seeking to stop the cremation of her body after her suicide, arguing it offends their ultra-Orthodox beliefs even though it was specified in her will.

The legal battle has highlighted the uneasy relationship between Israel's commitment to gay rights, rare in the Middle East, and its ultra-Orthodox Jews, who abide by a strict religious lifestyle.

May Peleg, a 31-year-old who served as head of the executive committee of Jerusalem's Open House LGBT community centre, committed suicide over the weekend. She had long been estranged from her family.

Before her death, Peleg put together a will that specified she wanted to be cremated, but her mother has asked a court to halt it, Eran Globus, one of Open House's directors, told AFP.

Suicide and cremation are not allowed in the Jewish faith.

"May knew that her family, whom she had not been in contact with for years, would try to oppose her cremation and require a burial according to Jewish ritual, and she contacted a lawyer as a result," he said.

Peleg was born a man and underwent surgery to become a woman after having been married and divorced. She had two children from the marriage.

Yossi Wolfson, lawyer for Peleg, told AFP that case involved "the question of knowing what prevails: blood ties, which attach May Peleg to the (ultra-Orthodox) community, or those that she chose, the world of the LGBT community."

In the court filing, Peleg's mother referred to her in the masculine and asked that the burial be done according to Jewish law.

"I'm from an Orthodox family and my son's burial is very important to me," Israeli newspaper Haaretz quoted her as writing.

"I heard there was a will but I haven't seen it," her mother wrote.

"In any case it should be disqualified since my son was undergoing a deep mental crisis and was not capable of drawing up a will."

Peleg wrote in her affidavit before her death that she feared her mother would seek a religious burial for her, Haaretz reported.