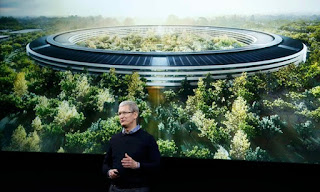 The last time the mayor of Cupertino walked into Apple – the largest company in his small Californian town and, it so happens, the most valuable company in the world – he hoped to have a meeting to talk about traffic congestion.

Barry Chang barely made it into the lobby when Apple’s security team asked him to leave, he said.

“They said ‘you cannot come in, you’re not invited’.

After that I left and have not gone back,” said an exasperated Chang, who’s been mayor since December 2015 and had approached the computing firm when he was serving on the city council three years ago.

Many people in Cupertino, a 60,000-person town in the heart of Silicon Valley, are beginning to organize around their overburdened city.

They claim the region is struggling with aging infrastructure and booming companies whose effective tax rate is often quite low.

Frustrated by traffic and noise, some in Cupertino are trying to put a stop to more development, which they argue brings more congestion on the roads, parking and train system.

But Chang says limiting new development would damage the regional economy and that the real solution should be higher taxes on the wealthy and companies such as Apple.

In response to Chang’s pro-development efforts, a group called Cupertino Citizens for Sensible Growth is working to recall him for failing “to fulfill his fiduciary duty to Cupertino citizens”.

He says he’s “not afraid” and is running for California’s state assembly.

Convincing local politicians to battle Apple is hard, Chang said. He recently proposed that Apple – which is building a massive new campus its own employees nicknamed the Death Star, or more favorably, The Spaceship – should give $100m to improve city infrastructure.

To move on the proposal, Chang only needed to get a single vote ‘yes’ among the three other eligible council members. He failed to get that vote.


“This American politics. This so-called democracy,” Chang said, recalling the unanimous ‘no’ vote. “Apple is such a big company here.

The council members don’t want to offend them. Apple talks to them, and they won’t vote against Apple. This is the fact.” Read more: