Arianna Huffington's Advice to Graduates: Prioritize Sleep To Enhance Performance In Every Way 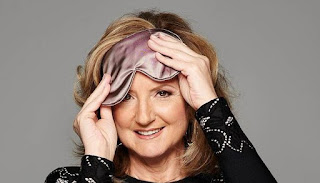 If you look at the world you are graduating into, it's a split screen world.

And depending on what part of the screen you are looking at, you will have a dramatically different perception of what the world looks like… and it will alter everything you think about the present—and especially about the future.

On one half of the screen: the old world is exploding in a pre-scientific, almost medieval eruption of irrationality and anger, where facts don't matter, and truth can be nullified by assertion.

But on the other half of the screen, there is the world you're creating, an explosion of creativity, innovation, empathy, and compassion.

And during this time of transition and reflection, I ask you to consider one thing in particular that will make the world you are creating infinitely better: sleep.

There’s a popular Red Bull ad that says, “Nobody ever wishes they’d slept more during college.”

But is that true? Think back on how you spent your college years.

Did you ever feel like you were in a no-win situation, forced to choose between sleep and life?

Or perhaps your campus had its own version of “Sleep, grades, social life: pick two,” with the consensus that, as one student put it, you could “sleep when you were dead (or graduated).”

If any of that rings true for you, that’s one lesson you should leave behind.

For far too long our colleges and universities have been laboratories not only for learning but for burnout.
This association of college life with sleep deprivation is deeply ingrained in our culture.

The defining ingredients of college life—the pressure to perform and get good grades, the newfound freedom, the yearning to fit in socially, and the endless digital distractions—aren’t exactly a recipe for great sleep.


Especially when you throw in other damaging habits that have become an accepted part of college life, like bingeing on energy drinks and alcohol.     To read the entire article, click here