Driverless cars are becoming a reality

What does this actually mean for drivers? 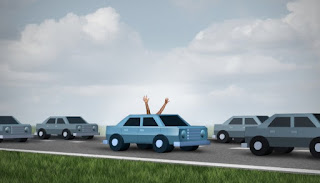 Years ago, if someone asked me to picture myself behind the (hands-free) wheel of a self-driving car, I probably would have replied: “maybe if I worked for Google X.”

But today, my response is different. There have been a myriad of major breakthroughs recently, including Tesla’s Autopilot technology and GM’s investment in Lyft for autonomous car research.

The once intangible concept of a driverless car is now becoming a reality, and connectivity is already an essential standard for many new car models.

So what does this mean for the consumer?

There are an abundance of new opportunities that arise from the mass adoption of connected car technology, and early players are seeing strong success from venturing into this new terrain.

In fact, the connected car industry, including apps specifically designed for cars and enhanced navigation, is estimated to grow to nearly $290 billion by 2020.

Consumers are hungry for anything that make their lives easier, and more efficient transportation is poised to satiate their appetite.

Convenience is a strong driver of consumerism.

The buy-in from some of the biggest tech players signifies that the concept of a “dashboard OS” will likely become the norm very soon.

Just as software companies are already finding ways to adapt their apps to watchOS and Android Wear, it will soon be imperative to adapt to the car’s operating system as well.

In the very near future, cars should be able to seamlessly interact with the world around us without having to struggle with multiple touch points.

Beyond the obvious use cases like native navigational apps and text message alerts, we could pull up to a parking meter or garage and our car could automatically process payment.


This aspiration could become a reality in the very near future as Visa, Honda and ParkWhiz are already working together to test a mobile payment system that enables consumers to pay for parking and gas without leaving the car.     To read the entire article, click here
at 2:00 PM

Email ThisBlogThis!Share to TwitterShare to FacebookShare to Pinterest
Labels: Automotive