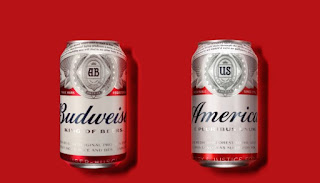 It is only May but we already have a winner for the worst marketing idea of 2016.

Budweiser is taking rebranding to the next, or possibly lowest, level this summer by renaming its beer "America".

And, it doesn't stop there.

The "King of Beers" will become "E Pluribus Unum."

The text at the bottom of the can will read, "From the Redwood Forest to the Gulf Stream Waters, this land was made for you and me."

The bottled version will get a rebranding, too, which features the first lines of the Star-Spangled Banner at the top of the label.

In this particular case, it’s the last refuge of a brand in free fall.

Budweiser was introduced to the American market by Anheuser-Busch 120 years ago and eventually became the best-selling beer in the world.

However, Budweiser has been losing share ever since 1989 and, in 2008, Anheuser-Busch was acquired by a Belgian company called InBev.


It is ironic that this spasm of patriotism is completely manufactured by foreigners – InBev’s top management is Brazilian.     To read entire article, click here