Everywhere you read, someone is predicting the imminent decline of the United States and the end of the American Century. Thomas Friedman and Michael Mandelbaum’s That Used to Be Us paints a picture of an economically emergent China that is catching up to us on every front where it has not already surpassed us.

For others, the competitive threat comes from the collective rise of the BRIC emerging market powerhouses – Brazil, Russia, and India as well as China – which are growing rapidly and together make up a substantial share of the world economy.

Fareed Zakaria’s view that the U.S. will likely remain the world’s dominant power but in the context of what he calls the “rise of the rest” seems more on point.

A new study recently released by the Martin Prosperity Institute subjects propositions regarding American decline and the rise of the rest to an empirical test.

It provides a wealth of data to measure the relative standing of 82 nations on technology, innovation, human capital and other measures of economic competitiveness. I'll be summarizing its main findings all week, and today we start with technology and innovation.

From Karl Marx to Joseph Schumpeter, economists have long noted the role that technology plays in economic progress. We measure technology and innovation according to three main metrics – research and development effort, scientific and research talent, and the level of innovation – and then combine them in a new, comprehensive Global Technology Index.

The first map (below) charts the percentages of economic output countries devote to R&D investment. The U.S. ranks sixth. Israel is in first place, followed by Sweden, Finland, Japan, and Switzerland, which make up the top five. South Korea, Germany, Denmark, and France round out the top ten. 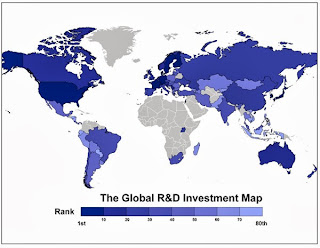 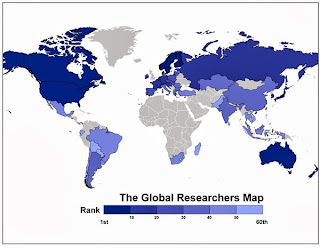 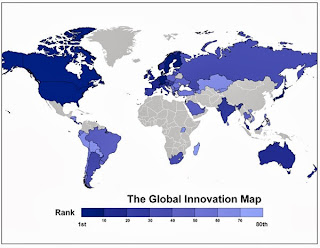 By combining all three of these measures, we end up with an overall Global Technology Index, a broad assessment of the technological and innovative capabilities of the world’s leading nations. The United States ranks third. Finland takes the top spot, followed by Japan. Israel’s fourth place finish may come as a surprise to some.

Israel has relentlessly pursued an economic development strategy based on launching innovative firms. Israel has the highest concentration of engineers in the world—135 per 10,000 people, compared to 85 per 10,000 people in the United States. Sweden, Switzerland, Denmark, Korea, Germany, and Singapore round out the top ten. 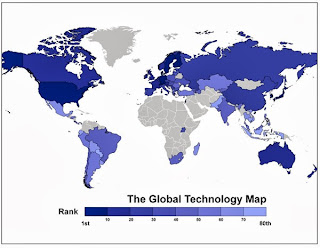 On the technology front at least, predictions of the rapid eclipse of the U.S. by China or any of the other BRICs are premature to say the very least. The reality is much more in line with the "rise of the rest"—a still very technologically innovative America facing somewhat greater challenges from other mainly advanced nations.
at 7:30 AM